The Bay of Fundy fog was just lifting as brothers George and Percival Nelson rounded up a crew of friends and relatives to participate in moving the old Catholic church from the heavily forested interior of Albert County to Lower Cape.”If it stays clear for a day or two, we can be all set up before you know it,” said Percival.

The others noted that their business, a monument plant that would be known simply as “Nelson Monuments” would surely be off to a solid start, given its headquarters.

There was lots to talk about in those exciting days of 1909. Marconi and Braun had just taken the Nobel Prize for wireless telegraphy. The exploits of Robert Peary and Matthew Henson were all the news as they became the first people to reach the North Pole.

Industry was changing too, thought George as he laid the foundation for what he hoped would be a business to sustain the brothers and their families. A substance called plastic had just been patented, and word had reached him of another new invention that was being shown in Halifax, a boat powered by an outboard motor.

The Nelsons hoped their skills in stone quarrying and cutting would see them to prosperity.

More than 20 years later, when Percival retired, a family dynasty was in the making. He could hardly anticipate as he entered his later years, that the entrepreneurial roots he and George had planted would grow and still be flourishing into the next century. George’s sons, Russell and Maurice, were already involved with the skills of their father, and in the winter of 1933-34, the company became known as George W. Nelson & Sons. 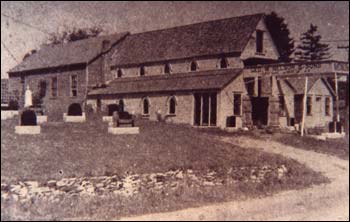 By 1946, the firm had passed completely to the next generation and Russell and Maurice became the sole owners of the firm. Four years later, business was so strong they saw a need to add an expansion to the monument plant that had outgrown the original old church.

In 1954, the brothers purchased the top grinder that is still in use today, and incorporated the rapidly growing firm as Nelson Monuments Ltd. The next year they expanded their market, selling on the Saint John River.

Growth continued. In 1956 the first wire saw was purchased, and in 1957, the Nelsons started quarrying in the Hamstead area.

Fifty years from its humble beginning, the firm took a significant step and moved their manufacturing plant and head office to Sussex, where they are still located today.

Milestones followed in the next few decades. In 1962 they built the first display on 224 Westmorland Rd., Saint John, and purchased the Black Quarry in the granite town of St. George. The latter was closed later in 1969.

In 1967, the company was taken over by Russell Nelson and his sons, Merrill Nelson, Eric Nelson, Carter Nelson and later, Garth Nelson.

In 1981, the firm started quarrying in Vermilion Bay, Ont., and four years later, the business had expanded to Kitchener, Ont., which Garth Nelson looked after in time.

From its centre in the heart of dairy country, the monument builders continued to expand on their original products. Besides building monuments for loved ones, they started to do signs and special displays, and then expanded into a whole new field of granite countertops. Business continued to expand, and orders were shipped to all parts of Atlantic Canada and the New England States as well as Quebec and Ontario.

A new era was launched for the historic family firm in 2001, when it was purchased by another entrepreneurial family, the Imbeaults of Moncton.

Today the same inspirational sense of caring and quality and innovation that fired the motivation of George and Percival to launch their firm in turn-of-the-century Albert County continues. New products are created and new skills are blended with the traditional trade to the benefit of a growing list of sophisticated clients.